Way back when I got Leo, over 8 years ago, I had this dream. I dreamed that someday I'd have two gray cats snuggled up together. Those who've been with us since then will remember that we had a senior gray kitty, Star, when we adopted Leo. They did NOT get along.. They moved to sort of tolerating each other, but were never friendly.
The closest they would be to sleeping snuggled up together was to be on opposite sides of a king size bed with two human buffers between them.. (Ok, I'm exaggerating a little.. sometimes they'd be on the same couch too, lol)

Leo and Glitter have come close to snuggling by sharing a pillow next to me, but they, (and I mean Leo mostly) prefer that there's at least my arm or that much space between them.

And then! Last night this happened! 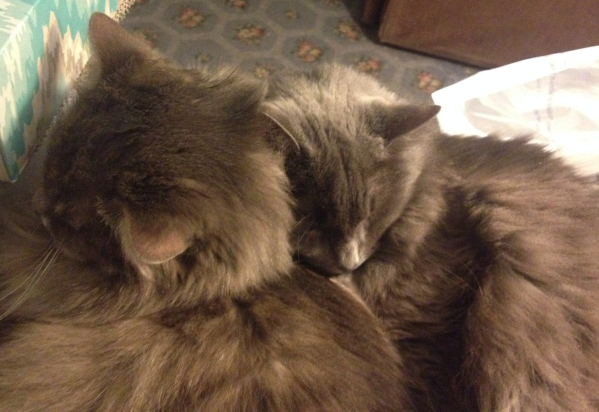 Glitter: I've never had an issue. I don't care who's there, when I want a place, I just take it. I'm that determined. 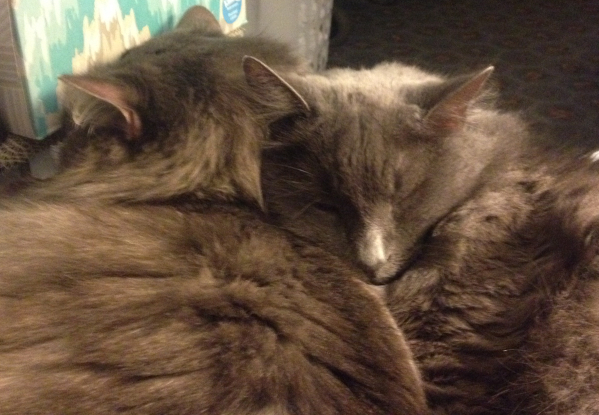 Leo: I don't like it.. but hey, it's cold today. What's a chilly mancat to do? When I warm up, I'll give her the slow paw to the head, it's how I hint that she's not wanted here. But I have to sneak it in before mom notices because she takes my paw before I can connect if she sees. Anyway, that's all, nap time now...zzzzzzzzz

(It actually ended better than I could have hoped, no slow paw of doom, Glitter got warm I guess and left before Leo woke up! I'm still beaming!)

Two days until the auction!!!!! Please share the news if you can!! 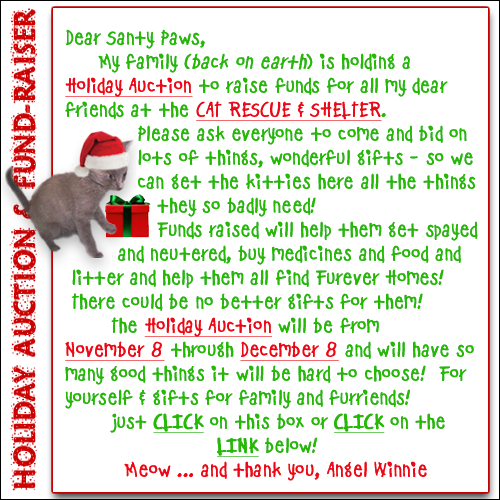 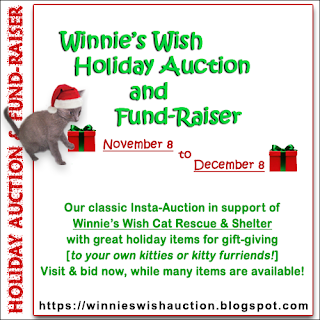 Aww, your heart must have almost burst with love for these two!

Oh my, I can only imagine how thrilled you were to see that happy sight!

That is cool! I'm sure it was somewhat worth the wait for them to really bond with each other.

How sweet! And good thing you have photographic evidence now.

What a beautiful photo! Looking forward to the auction :)

That is so sweet.

It's always sweet to see such progress!

Wow, that is just simply heartwarming!

That was a pretty special moment!

It does sometimes happen. At our house Einstein is getting along with the crew, other than Rumpy that is, Sometimes... MOL
Cat Oh Cat the Auction! Wheee. Lets go and BID BID BID BIG