Oh boy oh boy! We are going to have such a PUN filled week!! Greg, who is the punniest guy I know, liked my song on Saturday. Since then, he hasn’t been able to stop giving me more punny songs! There may be enough for more than a week of pun, but I’m gonna try to limit it a little!

Today I will give you two. They’re short. Well, all of them are kinda short so far, though he is working on a longer one. The first one is to the tune of Twinkle twinkle little star.

The next one is more a nursery rhyme than a song, but it works! I’d say it’s to the tune of Jack and Jill, but there’s not really a tune for a nursery rhyme!

Leo and Star ran up the stairs
and fought over a glass of water.
Dad came up and Leo ran down,
with Star thundering after.


I want to give a shout out to Spitty’s human for being the only one (that said it) to know that the first song was to Peter, Paul and Mary’s song Stewball! I should have said what tune that was then, sorry! The second one, easier to tell, was to the tune of Jim Croce’s Bad Bad Leroy Brown.

I also should have said, or reminded those who’ve read it here before, that the glass Leo is seen drinking out of is Star’s own personal glass in the upstairs bathroom. Greg says that it’s spoiling her to give her that glass, and refilling it two or three times if she rejects it for some reason, but I say she’s a princess, so she gets what she wants!


Would I leave you without pictures of the kitties? Never! (Ok, occasionally, but not often!)

Recall the time Leo was under the Royal Footstool and Star was on top of it
in THIS POST? 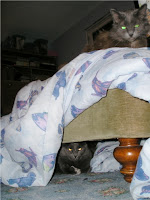 Well it happened again, but the other way around! You will note that there is yet another blanket on the Royal Footstool now, a red fuzzy one. I have given over the butterfly blanket to Star and it sits, neatly folded by her daddy (who's spoiling her now!) on The Chair, where she likes to nap during the day.

Here we have Star under, and Leo on top. He knew she was there and kept trying to find a way to sneak over the edge and poke her in the bum. But she also knew he was up there, and did not give him a shot at the poke! 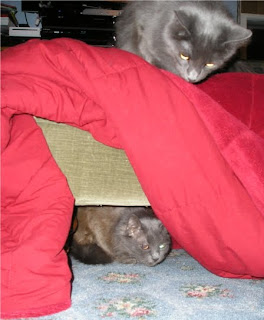 Leo: It's my turn! I's gonna poke her in the butt under there! 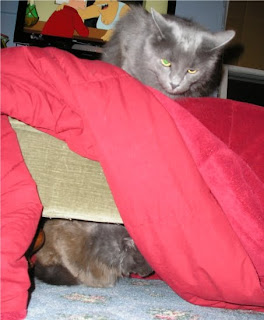 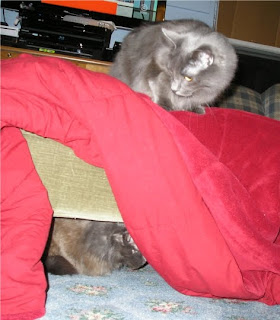 Star: I know you're creeping around up there. And the second I see you, the claws will be out. 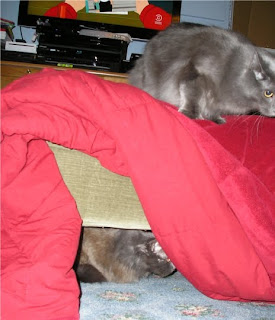 I wonder if those two are ever going to simplify their relationship - they have so many rules, MOL!

Why don't you both poke each other in the butt and then have a restful nap.
Luv Hannah and Lucy xx xx

If you wanna poke Star in the butt, you would want to face the other way, Leo! :)

wise decision leo... can't wait to read all the puns.

Some people don't like puns, but I think they demand a good knowledge of the language and a great deal of imagination. Certainly the latter quality is necessary for living with cats, too.

It looks like Star and Leo are spending more time in proximity to each other. That's great news!

star...your brother leo wants to put a bell on you so he always knows where you are...I say, you tell him...fine, but...it MUST be made from PLATINUM...then like take the ringer out !!!

You are very punny!

WE have a bunch of cats around here that behave the same as you two. We love to hiss and growl at each other. But at least you are sort of close to each other. Have a great day.

Inthink you two alwaysmhave fun, you are just trying to make us think otherwise!

MOL! We like those puns! Leo and Star, it sure sounds to us like you two are beginning to be mostly okay with each other! :)

Star, our Leo has his very own drinking glass too. He likes the water to be nice and fresh and we leave it by the sink for him.
It looks like you two are geting closer despite a few hisses here and there :)

Those are great punny songs! Just like someday, you two will be great friends. We just feels it! Purrs...

HAH! Those songs were great! Pop is always coming up with puns but none that can be published. MOL! Oh, Leo, just behave!

I like your songs. Butt poking sounds like a fun game. Maybe I'll try it on Oja.

At least both of you will be close to each other, all of us avoid each other like the flu!

Leo is *SUCH* a creeper! I wish you'd gotten some claws in him Star. Thanks for the shout-out! The Human knows her some PP&M! Oh STewball was a racehorse/And I wish he was mine/He never drank water/He always drank wiiiiiiine..... Ahhhhh, the good ole days--when music was music!

Oh shut up Human. She sounds about a squillion years old which is not surprising since she is.

Wowzers! That reminds me ouf our house!
Kisses
Nellie

Of course your Mommy may cup my sweet heddy in her soft hands and give me a kissie. I may not enjoy it as much as she does, but I promise no biteys or bloods.

why of course Mom knew it was Stewball! who wouldn't...heh...heh. And I am happy my gurl furriend Star is being treated by Daddy as the "twinkle" in his eye she must be!