Ok, I've had it with waiting for blogger to fix itself.. So I uploaded to photobucket and shared them that way. What a huge pain in the behind! But I wanted to use some new pictures!
So today I'm finally sharing those pictures of the couch sharing that I was trying to show the other day. Leo was on one end of the couch, Star was on the other end. At the same time! Shocker!
When Leo was new here, he'd sneak up on the back of the couch, one of Star's favorite spots at the time. He'd wait til she was asleep and then get on the cushion right next to her. But once she realized what he was up to, she totally gave up that spot. Leo took it over alone for a while. Then for a long time, no one slept up there.
Recently Star had been getting up there again. Leo wasn't interested because he had the Royal Footstool and his tree! Then out came the butterfly blanket, which Star LOVES. Leo does not seem to like it and he refuses to lay on the Royal Footstool if it's there. Too girly?? Anyway, so then he started sleeping up on the back of the couch again!
And now this week, both of them were on it, at the same time!  Granted, there's a whole section between them. But they are still sharing! 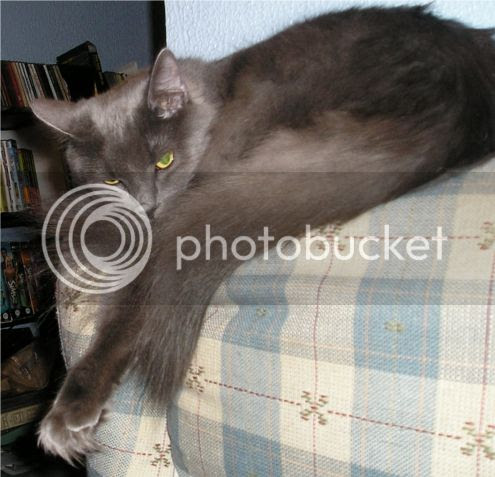 Leo: I know she's on the other end, but if we all stay quiet, maybe she wont notice me.. 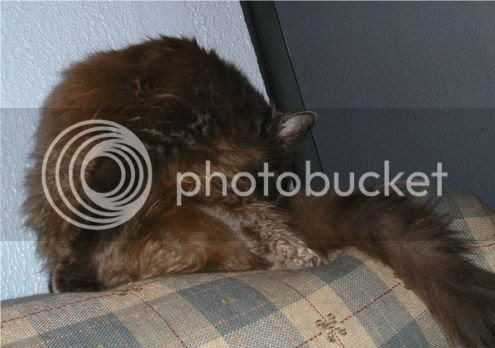 Star: I wake up with an itch and you have to take a picture? *sigh*
﻿ 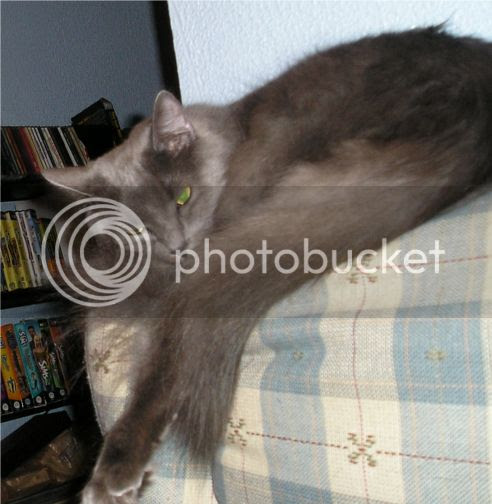 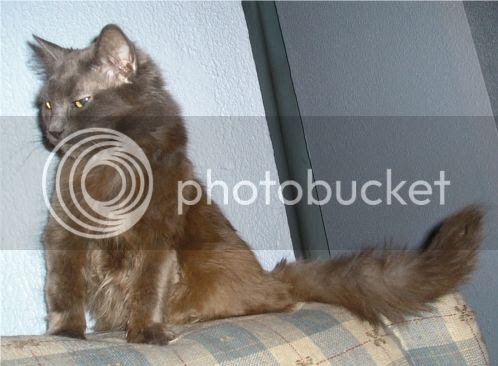 Star: I know you're there, you're not fooling anyone, you big barbarian. 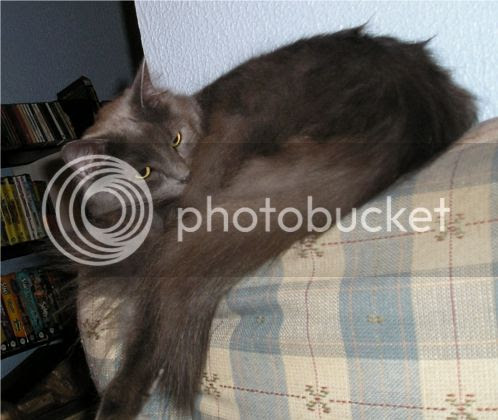 Leo: You know I'm here, and you're not trying to hand me my butt? Cool, then I'm going back to sleep! Night Princess Hissyface.

They did go back to sleep then!
Ok, I have to let you know that the nasty look she's throwing at Leo is more about her just waking up and the flash, she wasn't really glaring at him that badly!
~~~~~~~~~~~~~
I can't believe it's been this long and I haven't given the results of the Winnie's Wish Christmas Fundraiser! You guys rock! We raised $362!! Greg said we needed to round that up though, so because of you all, Chrystal and Winnie's Wish have a check for $400!
The FUN FUN FUNdraiser in September raised $1062, so that's a huge grand total of $1462 that is going to help keep the Cathouse cats in food, litter, medicine, spay and neuters, vaccines and all the other things that kitties need to keep them safe and healthy! Do you know how awesome that is!
This awesome:

Thank you, everyone! Everyone who donated, who shared, who blogged, who helped, who wished us well! You rock!
Posted by Andrea and the Celestial Kitties on 1/07/2013 12:58:00 AM

Yeah, we think we might just give up on IE and use Chrome!

Thank you guys for the big donation! That's seriously awsome!
... and it's time to make friends for the new year you two!

WOW! You did an amazing job for the Chrystal and the Winnie's Wish kitties! You get FOUR paws up from me!

That is wonderful. I am so happy for the Cat House and proud of your efforts!

Leo...I have to admit I'm on your side here.

GREAT NEWS about the fund raisers!! Wondering why Blogger isn't working for you, I'm not having any problems with it.

That was a wonderful amount for both Chrystal and Winnie's Wish. Oh no not paw-de-cuffs this early in the New Year!
Luv Hannah and Lucy xx xx

baby steps... they'll be the best of buds one day soon...

Cats make me laugh,sitting seperate ends of the couch :) Well done with the fundraiser :) xx00xx

holy moly - that is awesome about the fun-draiser!!!

mom uses firefox at home with blogger and that seems to work. also the freesizer thingie that Jan talked about helps....

That a great amount for Chrystal's ca thouse. We think you are really pawsome Andrea for doing all that hard work!
Yup. My Blogger problem is exactly yours! No button to be found anywhere to actually browse the photos in my file. I tried a different browser too and I also pay extra for storage so it's not that. It's just blogger being a pain in the ***!

Let me know when you get your browser button back and I'll do the same!

Sophie and the critters in the cottage xo

That is so terrific that you raised all the money for Chrystal. Well done. And it is so nice for all the cats who benefit mostly. Good stuff.

What wonderful news about the fundraiser!

Score! How cool is that? 4 figures 4 Winnie's Wish. So are you guys gonna go all soft for the New Year or continue keeping it real?

Yep--they ARE sharing!! All good there. And the looks--well--kinda say it all, yet everybody made it thru! Maybe next time--a little closer... :)

way to go on the fundraisers! That is soooo pawsome! And good work Star and Leo on the sharing :) hmmm...maybe we should be taking some notes...

That is seriously big cash! You rock, Human Lady!!! And I think the Barbarian should get off of Star's couch. Togetherness is overrated.

Cats sharing the sofa and What a great amount of cash yous raised! THat is fabulous!
YOU ROCK!
Kisses
Nellie

That is wonderful. I am so happy for the Cat House and proud of your efforts!see more