Star has a new habit. Greg says it’s me spoiling her, but I say it’s working. I have a bag of treats upstairs and when we go to bed Star now knows to come up and get on the bed with us. This is something she has not done since Leo showed up unless he’s been locked out of upstairs and she is locked in.

We stopped using the gate at night and there really haven’t been any fights. Chases, yes, fights, not so much. Ok, a few, but not bad ones.

Anyway, so she comes up and climbs into the bed. Sometimes Leo’s already there, sometimes he’s not. But she doesn’t care, she wants her treats, so she stays.

Leo sits and watches her get her snack. I always offer him some. He always perks up his ears and sniffs like mad, then looks at me like I gave him underwear for Christmas. The boy hates treats!

So Star has her treats, makes sure there aren’t any more forthcoming, then she jumps down to leave. And this is where it gets odd. Leo, who defers to Star while she eats, who leaves when left alone in a room with her, suddenly springs into action!

He races to the edge of the bed with his tail straight up and reaches down to poke Star in the butt as she leaves! It’s like he’s never heard that song:

"You don't tug on Superman's cape,
You don't spit into the wind
You don't pull the mask off that ol' Lone Ranger
And you don't mess around with Star."


This sometimes sets off a game of chase. She will run down the stairs, sounding like a heard of elephants all by herself. Then he’ll tiptoe down at some point. Suddenly, he comes running back up with her hard on his heels. He leaps onto the bed and dives over the other side. If I’m laying down, he will bounce off of my back..

Star, who anticipates this move, rounds the end of the bed at the same moment he dives over the edge! Of course, this is my side of the bed, and my legs are there, so when Leo dives behind them, Star stops. She turns and walks out with an air of calm as if she’s saying "I was done with him anyway."


This is how Leo watches the door and waits for Star to show up for her treat. 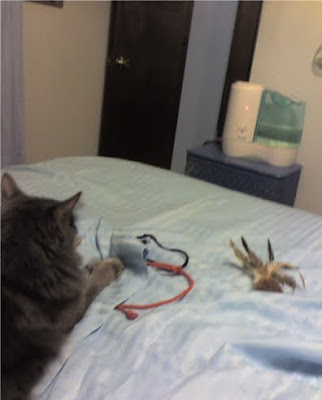 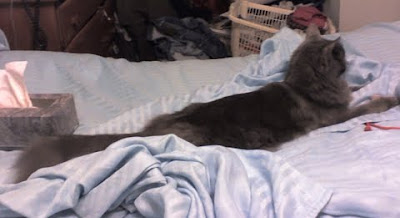 Good thing she always announces herself, 'cause she's too short to see over the edge! hee hee


There was a question yesterday about Spritz, Leo's sister who's awaiting a forever home, and her toes. Yes, she does have extra toes! Aren't they too cute! Extra toes are extra  cute! 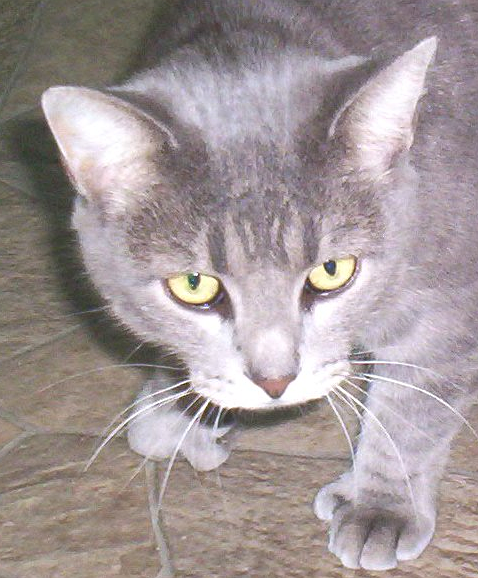 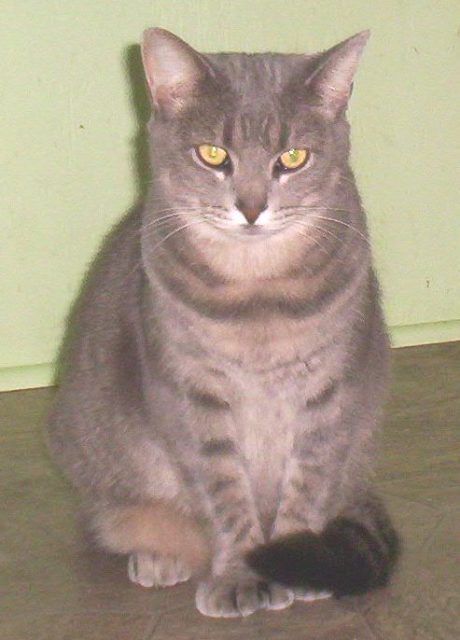 If you know of a perfect home for this sweetheart, please contact Chrystal at Daily Dose!
Posted by Andrea and the Celestial Kitties on 1/25/2013 02:19:00 AM

It does sound like a game! I only tap another cat on the butt when I want to play.

Sounds like such a fun game. Have a great day kitties. :)

Oh what a pretty girl she is! I hope she finds her forever home soon!

that is DEFINITELY a "play" routine for sure and I think it is too cute!
OMG Spritz is a Cody look-alike!

We love cats with thumbs, and some of our previous generations of cats were polydactyl like Spritz. Maybe we'll do a flashback post sometime about Radcliffe and his mother Sassy, both thumbed cats. We used to joke that with thumbs, they had the missing link that would enable them to work the can opener, but thankfully they never figured it out. We're purring for Spritz and her awesome thumbs to get a forever home soon.

You certainly have created a great game for your kitties, which uses up their leftover daytime energy so kitties and humans can all get a good nights sleep. Brilliant. Purrs and hugs from the kitties at www.thecatonmyhead.com, Lily Olivia, Mauricio, Misty May, Giulietta, Fiona, Astrid, Lisbeth and Calista Josette

It sounds very much like they are playing! We do think things are going right way between Star and Leo. :)

Cats are so silly

mama wants to know where she can get tickets to watch that nightly show :) she loves silliness in kitties.

I think you are on to something!

It sounds to us like playing, too! Paws crossed! :)

That Spritz sure is cute. How cool would it be if she got a forever home soon? :)

FaRADaY: Leo! Poking her in the butt? PAWEsome. Seriouslies!!

Leo, Star, I do believe you are playing. Leo..I have to admit I am intrigued with you. Especially since my picture is in your mancave. xoxo

Miss Spritz, I loves your toesies and all the extra ones add to the charm.

we are going to go with playing.... it certainly sounds like Leo knows how to start the game

And we love Spritz's toes :)

We think this is adorable and don't think it's spoiling Star at all. Rewarding good behavior, is all. Purring for that sweetie to find a forever home soon!

Sounds as though there is a nice , playful little game of chase happening there! Good kits!
We hope Spritz finds a home soon. She is adorable with those extra toes!

We've got lots of that going on here!
: ) Katie

Ivan and Izzy from WMD said...

Sounds like an episode of Caroline and Russell at our house!

Oh, that CERTAINLY sounds like playing to us! Especially since the chasing is reciprocal.

We think you should do a video, we would love to watch the whole interaction.

Fingers and toes crossed for Spritz and finding her forever home.

Totally playing. If nokitty is hissing or biting or bleeding, it is their little evening playtime.

It sounds like a game to me. There would be hissing or growling if they weren't playing. I should know. I'm trying to get used to two new boycats and if they touch me, I growl and hiss.

Cats like rituals so that everyone knows what to expect, and Star gets her reward up front. I think the formality of it helps keep either one from overreacting and messing up the fun.

I used to have 2 lady cats that would have a gladiator combat on the living room rug a few times a week. They would face each other, and Cassie (the older and larger) would give these special meows. After a couple of them, Angie would pounce, Cassie would wrestle and get the upper hand, then they would separate and do it again a time or two. Also, when they were younger Gus and Julie used to do the chase and counterchase thing. It is something to see two thirteen pound cats running full tilt through my small house.

It sounds like the cold war is thawing!
Kisses
Nellie