Two verses of How Much Is That Doggie In The Window, one for each of my kitties!

Here's my boy in the window. I just love how he's just a silhouette in that sunshine! 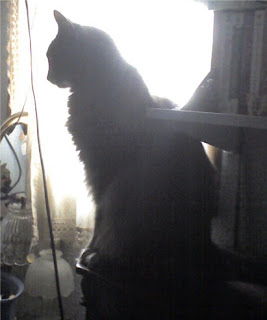 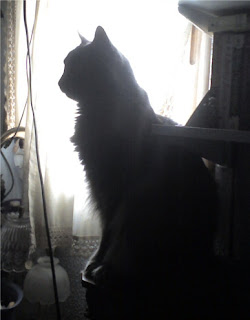 The sun warms my back, but do we have to have these silly curtains?

Look! You can see his slight overbite! Isn't it cute? 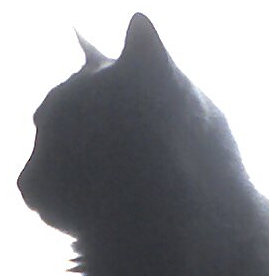 And here's Star playing with daddy's chair in a sunbeam! I only got the one shot because she was in a wild mood and took off on one of her running sprees after I snapped this one! 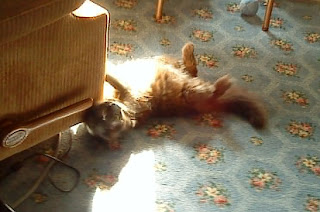 I've got you now, chair! You're not getting away from me! Bwhahaha!

I have to tell you what happened earlier tonight! No pictures, but oh my gosh, just picture it!

Leo jumped on the Royal Footstool, but the red blanket/quilt was all bunched up, not good to lay on. So I started trying to straighten it for him and he started digging at it. When he digs at the sheets on the bed, I know he wants to go under. He likes sleeping under the sheet. Or playing with his toys that are above him on top of the sheet, silly boy. So I asked him, do you seriously want under here? And I put it over him, thinking he'd run out immediately. After all, it's gotta be hot under there and not as easy to breath as under a sheet!

But he stayed! Ok, if you want to be there, fine with me. I lifted up an edge so he could get some air, and have a quick bolt hole if he wanted out. He got comfy and settled in like he was going to nap.

Star, who I swear had been watching the whole thing, even though she was in the middle of a bath, suddenly decided to jump on the Royal Footstool! Uh oh, I thought, she's going to whap at him through the blanket! But she acted like she didn't know he was there! She sniffed at the lump, but it must be too thick for her to know he was there!

So she settled in and continued her nap. I figured that Leo had to know she was there, even if she didn't, so I reached under and pet him in case he was nervous. He leaned into my hand and let me scritch his chin. When Star was turned to lick her back, I folded back the blanket so he could see her, he sniffed and backed up a half an inch, so I put the blanket back. Star turned back around and was like "huh?" I had to giggle!

I think she might have got the idea that he was there after a bit, but she didn't do anything about it. Eventually Leo dived out and went to sit on his cat tree. The whole thing was funny and cute! Hopefully they'll keep getting close like that, and maybe next time, Star will know it's happening!
Posted by Andrea and the Celestial Kitties on 1/29/2013 01:50:00 AM

I think I can play with Star easily !
We have the same style ; )

You know, I really don't think they hate each other. Binga and I spat all the time, but the other day, when my human stepped on Binga's foot on the stairs and fell on her you-know-what - I went running after Binga to make sure she was okay! I did not care at all whether my human was all right (which she was... after a couple of moments).

That's progress! We have a strong feeling Star knew Leo was under the blankie...So it's good progress!

Surely Star could smell Leo under the blanket. Maybe out of sight is good enough to prevent a spat.

These pictures of Leo are really really nice. My human loves them!
Purrs

I hear the third man music...

I just adore silhouettes and pictures with light and shadow! Well done!

Also, I think maybe your two fur babies were both just happy being near you, and as a result weren't worried about each other.

That was fun, but I sure am stuck on that tune now!

We are beginning to think you have a song writer among you. Love the profile picture of Leo. That little over-bite is so cute. That would have made a great video with Leo under the blanket and Star on top. Funny and cute! Hugs and nose kisses

I SO want them to get along. I really REALLY do. Lots.

I have jumped on the bed before, only to have the blanket pile hiss at me!

Following that love-tap chase game, my Human says she thinks a rapprochement is in the works. Leo and Star, Star and Leo, Besties 4ever? Hmm.

Star and Leo will have spats, yes, but they are growing a relationship..I hope..cuz I may need some notes from Star later in Feb...wringing worried paws...

Oh! Star is JUST like mes! Me and Kozmo does that too. Me would like to be more friendly with him...but me just can't!
Kisses
Nellie