I forgot I was going to post pictures of Star with the prototypes of the ornament balls for the Winnie's Wish Fundraiser! I must have made about six different ones, and they kept disappearing! I stuffed them, but never even sewed the hole up because I was just seeing if they were round.
Let me tell you, making a round ball is not as easy as it sounds! I tried making patterns off of the kitties toys, didn't work. I looked some up on line, and got football shapes instead of round.. I finally found one that I could alter a little and get a pretty round ball! And that one disappeared too..
It was Star. She stole every one of them and batted them around the house. Every time I saw one, I'd snatch it up and sew it shut so she didn't lose stuffing all over the house! I'm pretty sure they're all sewn now.. I hope.. At the moment, I only know where three of them are. And that's because Star batted them through the livingroom today!
I made them out of denim because I had some worn out jeans that I was going to toss out and then thought what the heck, they can be prototypes! There is no nip in these balls, but Star loves them just the same. She scoops them up with her claws and throws them around! She's gotten pretty good at it, but it's soooo hard to catch her with the camera! Digital is so slow!
Anyway, here's the pictures I got!
﻿ 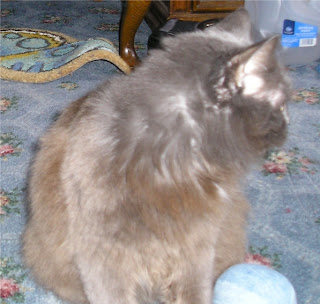 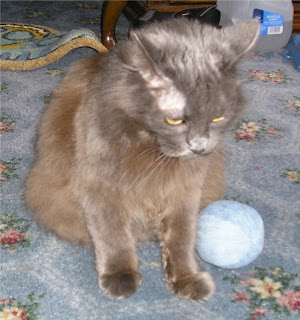 Getting ready to attack it.. the secret is to not let it catch you looking at it.. 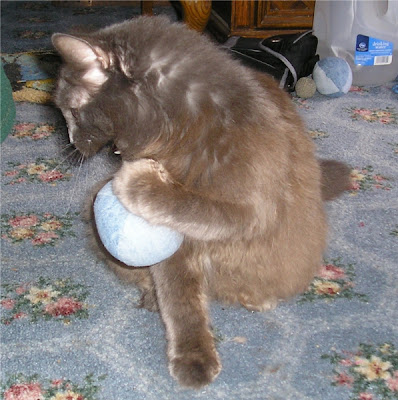 Then snatch it! Bwhahahaha!
(see my tooth? I was serious!) 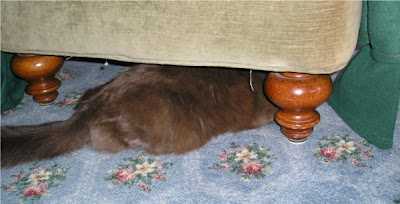 I dived under the Royal Footstool after it!
Mom missed that with the flashy box, hee hee! 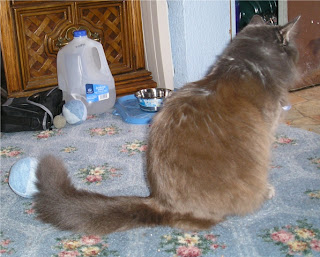 
Don't forget our Fundraiser! Ornaments for your tree, or use them as toys for your pets! Catnip is optional! And now, so are squeakers for doggies! (They are ordered and will arrive within a week I hope!) So lots of fun for kitties and doggies if you prefer them as toys! 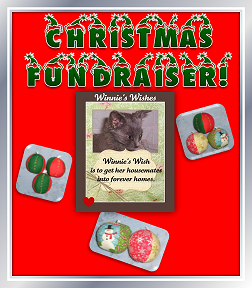 The FUN FUN FUNdraiser toy sets are still available too! Presents for kitties!
Posted by Andrea and the Celestial Kitties on 11/27/2012 02:56:00 AM

It looks to me like you did a GREAT job getting that ball round! And it looks like lots of fun too.

Those balls look pretty round to us! Perfect for batting around. Lucky Star!

Oh Star, those look like great toys. Two Two loves to play with balls the same way. They look like great ornaments but wouldn't be on a tree for very long here. Take care.

obviously star approves of your work.

Wonderful job advertising, Star! We can't wait to get our ornaments!

Good job, Star! It looks like those balls are really a lot of fun.

I guess you could say Star gives the ornaments two paws up! Heehee.

I nominated you for some awards: http://texascatny.wordpress.com/2012/11/27/another-this-that-and-a-lot-of-thank-yous/

Whoa! someone never heard the word Share! If I lived with you, you'd never have to worry about where your balls are. Wait, that didn't sound right. MOL

we like the size of that toy....big enough to whack around and grab. :) we lose toys around here all the time.

Well the prototype sure was a success!

Wow you must be exhausted :-)

It's certainly difficult to be creative with a darling cat who steals your material and plays with it,lol !

Cool how cat just knows the BEST toys to play with! Hmm--will you share with me...?

Star is a heckuva product tester.

Nice job on those!

Too fast for the flashy box! WooHoo! Great balls!

You know what??? Those are my favrit kind of mice and balls too! Lightweight and made of fabric so I can plays wif them MYSELF and toss them around really far and not have to wait for my BORING, LAME Human to toss them for me. I can be self-sufficient!!!

We bet Brulee would enjoy those because she loves to carry around Mom Paula's socks. Have you made any toys out of old socks?

Pee ess - we love your header!

I play with my toys too when no one is looking...I don't like to be watched...good one for you Star keeping Mom guessing where her prototype balls were going...paw pats, Savannah