Moose in the Snow

We have been hit by the snow fairy around here! My mother is just a few miles north of us but she seems to have even a touch more than we do. Her kitty, Sir Moose-a-lot Goodyear Roadkill Thunderbottom is NOT happy about this. He insists on going outside every day and this stuff is cramping his style!

Just a note on how he's doing since we lost my dad, Moose's best buddy; he's starting to be more affectionate with other people. He used to reserve most of his attentions for my dad, but now he's letting other people hold him and pet him. The only thing he won't do is sleep with my mom. He slept with my dad all the time, naps and overnight. If my dad was heading to bed, he'd say "Come on, Moose" and the big ol' boy would bounce on down the hall with him! My mom says that he will occasionally get on the bed, but by the time she's done getting her breathing mask and everything set up, he's lost patience with all her movements and leaves. But all in all he's doing very well. If only we could all snap back as well as a cat, right?

Back to the snow. Moose still screams to be let out and begs at the door, but once that door is open, he looks up like he's saying, "Are you kidding me?!" I do not blame him in the least for staying inside, it's too freaking cold!


Here you can see his paw prints go out and circle right back in again, don't even get to shut the door! 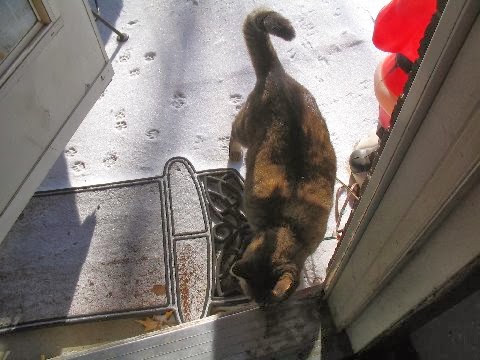 Just who's responsible for covering my yard with all this cold stuff?

And here's what he was looking at out there. The little foot prints you see on the sidewalk are bird prints because my mother puts corn on the walks instead of salt. (She leaves a short layer of snow and puts the corn down for traction, personally I prefer clear walks and salt!)
What looks like people footprints are actually squirrel butt prints! He jumps from spot to spot, sits and digs for buried corn. That's the sidewalk that had been shoveled the day before.
See the 'hats' of snow the bird feeders are wearing? 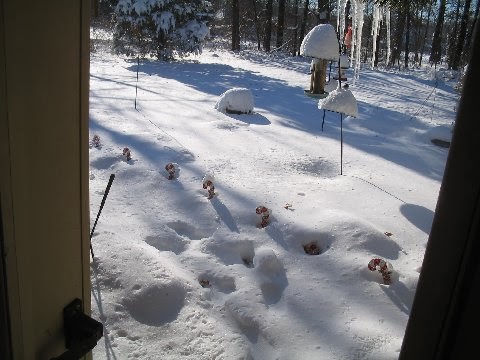 This is Moose's backyard, it took two days to accumulate that much snow on the grill. It's deeper than he is tall! 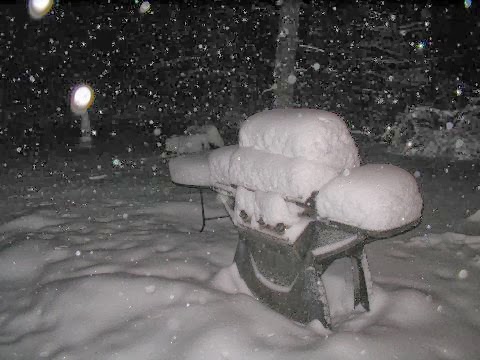 I had a couple of videos I wanted to share, but they won't load, grr. I'll try again with them tomorrow maybe.
Here's a still from one of them, Moose at the door watching birds! Oh boy does he want to get at them, but not enough to go out in the snow! 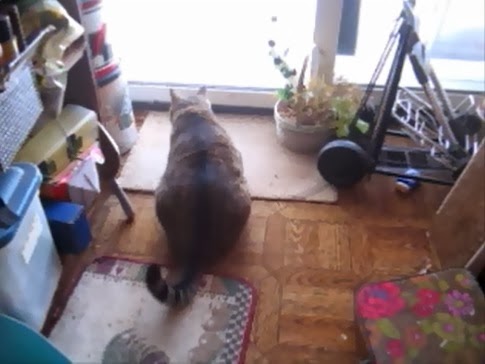 I'll be sharing a different Winnie's Wisher or two every day as they are over full and are in serious need of adopters! If you know anyone who needs some furry love, please direct them to the Daily Dose side bar and all the available kitties who are hoping for forever homes! 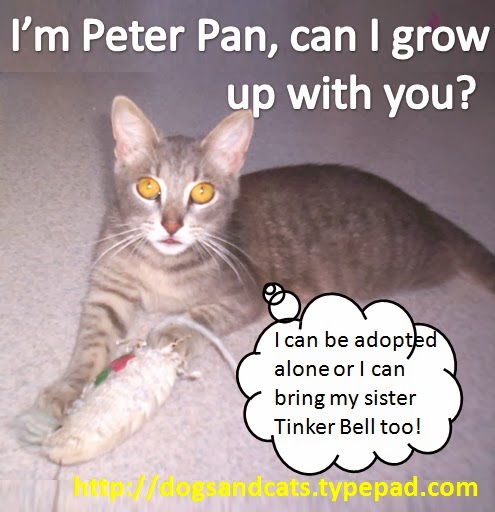 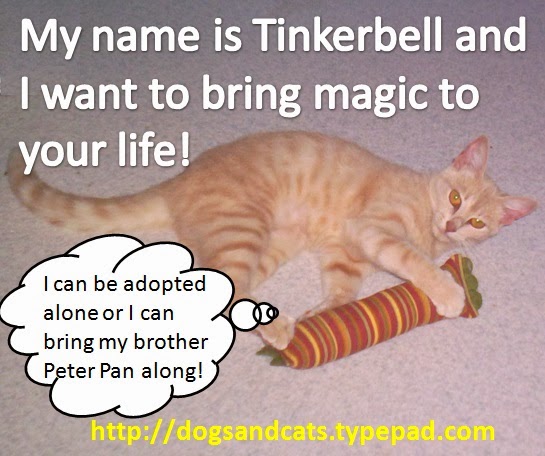 (Most orange cats are boys, Tinkerbell is a girl, wouldn't you like a rare beauty in your home?!)

Alasandra, The Cats and Dogs said...

We agree with Moose, snow is for the birds. We are glad he is adapting to life without your Dad and his best buddy.

Tinkerbell and Peter Pan are so cute - we hope they will be able to stay together. We hope they get a warm and snow free home.
Luv Hannah and Lucy xx xx

hey Moose - stay inside....just to darned cold out there :) but glad to hear he is doing well with your mom

Oh, mom's eyes watered at Sir Moose and his story here on down the road. I am glad he is handling his grief though. And that the rest of the family is as well. ALL of you be well, stay well and lots of love from mom and me.

Oh my goodness too much snow, definitely make Moose grumpy.

Moose dood, we totally feel your pain. We gotted another 4 inches and it's sooooo cold mmmy refuses to open the door so we can look out and complain to her. MOL!

We think Moose is very wise to stay indoors. That looks way too cold for a Kitty!

The cat before me always used to blame my human when the weather wasn't to her liking - she would have been really mad if she had ever woken up to this!

Star! Come see. I gived you an award.

Moose hates the snow as much as us!
Right now,we is getting more... And Peter Pan and Tinkerbelle is beauteous cats!! Mes sure hopes they gets their forever home together!!!
Kisses
Nellie

We're glad to hear that Moose is doing all right. It's been a trying time for him and the rest of your family, and we're glad that he is adjusting.

Oh my, that is a lot of snow. Those of us who do get to go out in the yard do not like the yucky white stuff at all. That immediate u-turn is what Misty May does when she goes out and decides it is too cold to stay. Glad to hear that Moose is adapting. Bet he'll be sleeping with your mom eventually. Stay inside and stay warm. Purrs and hugs, Lily Olivia, Mauricio, Misty May, Giulietta, Fiona, Astrid, Lisbeth and Calista Jo

Wow--that's a lot of snow, my friends! We don't even have 10 drops of rain! And the Sierra ski resorts would KILL for half that snow!

It is really good to see Moose and hear that he's warming up to some other Humans. It must be in the air--even SPITTY has been a tiny bit friendly to the neighbors!

Yikes, that is way to much snow!

It's good to hear that Moose is adjusting to the loss of your dad. Maybe, in time, he will sleep with your mom. All that snow is beautiful but it must be cold on his paws.