Leo was given the Illuminating Blogger Award by Mica Minnie Moo of Twinkletoes Tails! So now he has to give an illuminating fact about himself. 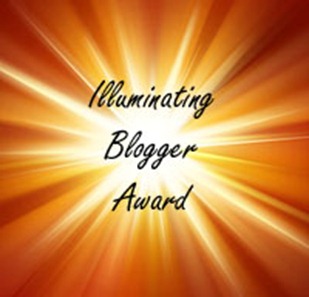 Which is not an easy thing, since this blog started with him when we got him from Chrystal. That means most of his life with me has been recorded here. So after thinking hard I think I managed to uncover something!

You know that his full name is Leo the Chinese Lion. But you may not know what he has in common with lions. Lions don't purr or meow (Leo does both, that's not the thing!) but they chuff. When Star does her stalky stare at Leo, he doesn't growl, doesn't meow. What he does is chuff at her. It's kind of an ehh ehh ehh noise that lets her know "I know you're watching me" as well as alerts me to the stalky behavior.

Talk about coincidence! I just had to stop writing because I heard his distinctive chuff and saw Star creeping up on him. I've learned not to treat her like she's been being a bad girl because that just guarantees that she figures she's already in trouble, she may as well kick his butt while she's at it. So I had to soft call her and draw her attention to a different sunpuddle (he was in the one she wanted) to avoid a fight. Whew!

Now we have to pass the award on, here's who we choose!

Mr Jinx at Manx Mnews
Spud at Random Felines
Sascha at Brian's Home (I know one of the sisters already got the award, but this is for Sascha!)

Oh, and I suppose it would be bad of me not to put up a picture of my boy, now wouldn't it? 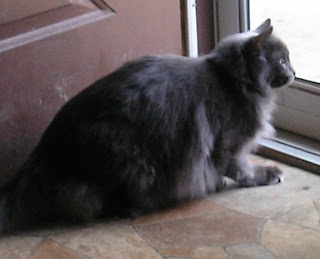 Almost forgot to mention! Last night, I thought I heard Leo chuffing so I paused what we were watching and listened, and he was actually, seriously, no fooling around, really growling! Ok, it was a little high pitched, but he IS a teenager.. (do boy cats do the voice change thing?) He was looking out the window and having a complete fit! When he ran to the door, I figured out why. There was a big kitty looking back at him!

So I guess the chuffing is reserved for Star, real growls are for intruders!

Why Leo, Mr Jinx sends his thanks for thinking of him for this award. he is our shy boy, even if he is the mancat of the family. We will help him do this post. Thanks again that was so thoughtful of you to consider him.

Congrats on your illuminating award, Leo!

Concatulations on the award, Leo! I never heard of the chuffing thing before!

Congrats on your award, Leo! We've never heard of chuffing, but we bet we'd do it too if we had a big kitty staring at us through the door.

Kat and the Furrsonality gang said...

Concats on your award, you guys!

See I think that is sweet, Leo does not want to for real growl at his sister, so he just chuffs at her. Yes, I am sure that really, really deep down inside he loves her!

The question is not so much whether deep down Leo loves his sister (chuff v. growl), it's whether Star would really eat him is she caught him, MOL!

We think that chuffing is just purrfect for Leo! The more we learn of him, the more we like him!

"Leo the Chinese Lion". We LOVE it!

hey - Spud won an award....he is very excited about getting a post all to himself. :)

Love the redirection of Star - it makes all the difference sometimes.

Congrats on the nice award! That was illuminating and I did not know what a chuff was! Sister Sascha was so excited and says thanks for thinking about her!!!

Sascha posted her award today. Thanks!