You know when you go to take a picture because your kitty is just too cute and the little bugger moves just as you snap the shot? Well that explains today's picture! 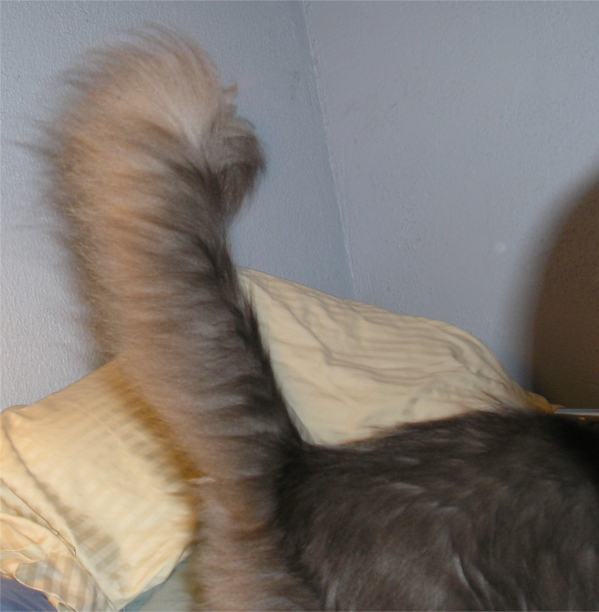 Leo: Time for my pettin', I'll come to you this time!

So why use that shot? Well, I adore that feathery tail of his! Especially when the tip of it flips over from side to side as you see here so it looks like a big fluffy question mark!

Aside from that, the "mostly missing" part of the title kind of describes how we've been blogging lately! It's my fault. Not that it would be the kitties, right? But still, it's been bugging me that I can't seem to get myself together enough to blog more. I have a lot of reasons, but they would start sounding like excuses and that's just boring. Basically it boils down to that I used to always try to post around midnight and now I can't and I feel weird posting in the middle of the day. But now I'm thinking I have to get over that and just post when I can and not worry about what time of day it is!
So, here's hoping we won't be mostly missing any more but will be at least partly back!

We'll work on being better about commenting too.. I've been visiting, but for some reason when I use firefox, which I've had to start using for most stuff, comment boxes are missing for a lot of the blogs I read. I'll try to figure it out so I can comment more, just know I am reading and we loves you all!!
Posted by Andrea and the Celestial Kitties on 8/19/2019 10:07:00 AM

Cats love a routine and get bothered when that routine is changed, as Cat parents - we tend to get into that mindset too! MOL!

Awww, they always move when you're holding a camera or phone. It's what they do.

Try using Chrome instead of Firefox. That may help you with the comments.

Thank you for joining the Awww Mondays Blog Hop.

Have a fabulous Awww Monday and week. ♥

Please, don't feel pressure on our part! Post when you want to, when you feel like it...there is no other way to go. Sometimes, I run off to the local library, to use their wifi...which is a total excuse to LEAVE THE HOUSE for a few hours. When all the cats are sleeping, and The Hubby wants to watch football (this is where I barf up a hairball of my own!), going out to read blogs and post is extra fun. Libraries are terrific places to be, and I am fortunate to have about half a dozen nearby to choose from.

Feline Opines, the World from a Feline Point of View said...

MOL! The Tribe of Five has a pact, any time we see The Female Human approaching us with the camera thingy we dart. It's quite a fun game!
And by the way, pawsome tail you have there!
Purrs & Head Bonks,
Oliver

My human says it's hard to change blogging schedules! She's been trying to figure out a different time to get my blog out and is having a really difficult time!

MOL. We have a lot of these shots too.

Beautiful busy tail and know the 'moving theory my doggie practices it too!) but you got a neat photo! Love it ^_^

Happy Day to You,
A ShutterBug Explores,
aka (A Creative Harbor)

There is no pressure with blogging. Just when you have the time then you can worry about posting. We love that fluffy tail in the photo. Our kitties at home never stay still either. The only good photos we get of them is when they are sleeping. LOL!! Thanks for sharing. Have a wonderful rest of your week.
World of Animals

Such a cutie. Nice to see a post from you.

Great tail escape Leo! Hey, we’re just glad to hear from you whenever it is!

That is a pawsome tail! We’re glad you posted it. And please post when you can...even in the middle of the day.

Mom said she knows about that. She tends to help me in the day light times. She can't get it together in the night as she's usually reading...babying me, or something. She just said she loves seeing my tail high like that because my tail, as Leo knows well, is also fluffy.

We were afraid, when we read the title of your post, that you had a cat go missing - so we are glad THAT isn't the case ! Purrs !

We make it a ting game when we see TBT with the camera. When we see his finger move, we have like 2 heartbeats to jump!

We had problems with the newest version of Firefox (68), but TBT reverted us to Firefox 66...

I love that gorgeous fluffy tail! My dad has a similar problem in that he typically does our blog thing in the early morning hours before work, but mom's trying to make his sleep later so he isn't nodding off on us around dinner time. It's proving to be a pointless battle. Anyway, dad tries to divvy his mornings between blogging, reading and writing. He's trying to get some flash stories polished for submission here and there, and once he gets into a novel he has a hard time putting it down. Life goes on, I guess. I'm just thankful I don't have such issues.