Before I get to the funday stuff, I have to show you a corrected version of my kitties. How could I, a loving cat mom, forget that my girls have tan noses, not black/gray??? Oh the humiliation! And since I went back to fix that, I decided to do a little photoshop-ish fix up of the light colors around their eyes. None of the choices fit exactly, so I did it myself. Along with adding the little darkness at Cashmere's lips. It's so cute, looks like she's puckering up! Not that it's easy to tell that because the cartoon Cashmere has her mouth open, as the real Cashy does often.

And as long as I was touching up, I gave Leo a gray nose, not a black one, to match his real one! I might, someday, play with it and lengthen Leo's tail and shorten Glitters because Leo has, I swear, the longest tail in existence, and Glitter's is oddly short.
(click to enlarge) 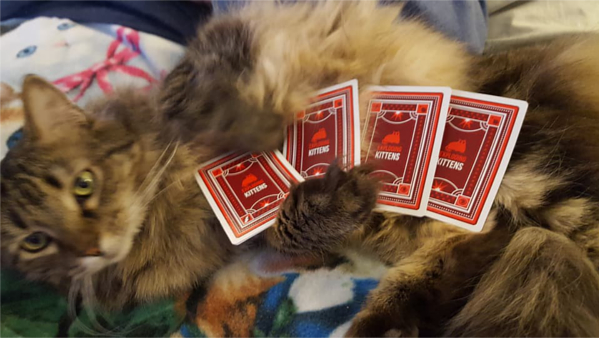 Cashmere: What the heck... Exploding Kittens?? EXPLODING KITTENS!! You call that a game?? 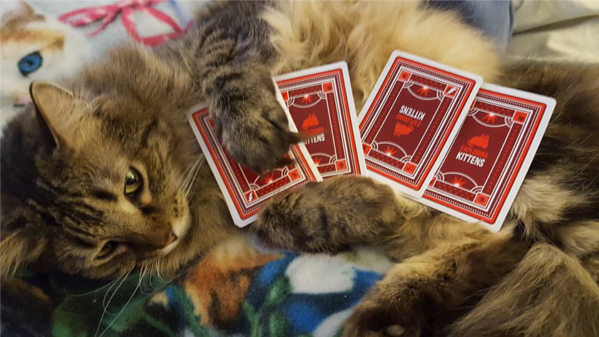 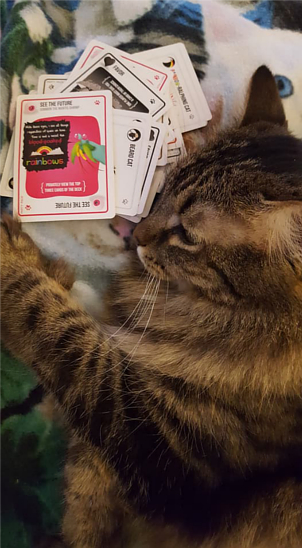 Cashmere: What does this one even mean? "See the future" I'll got your future... and it ain't pretty! 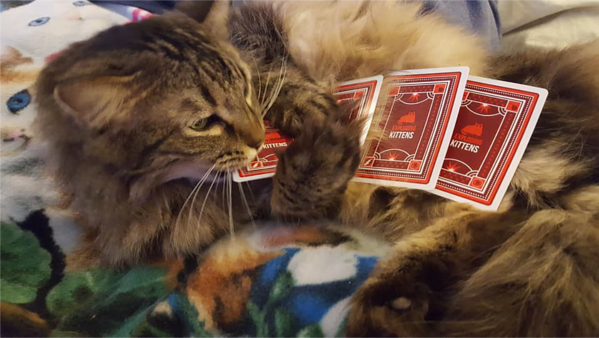 Cashmere: You sick, sick humans.. I'll show you what I think of your 'game'! I'ma eat it! 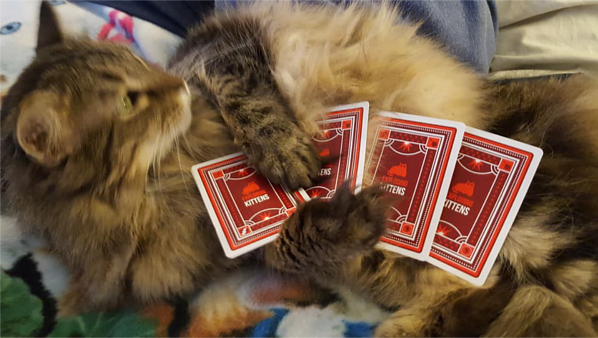 Cashmere: What do these "Defuse the cat" cards even mean? "Distract with Laser pointer" Let's get this straight, peoples.. Pointers are dogs, not cats! And if you think pointing at something will distr... Hey! RED DOT!!! Gotta go!!

Despite the name.. I love this game! And seriously, my cats explode all over the house after toys, microscopic dust motes, and invisible whatchacallits, don't yours??
Posted by Andrea and the Celestial Kitties on 1/26/2018 04:24:00 AM

The Cashmere shuffle is darn cute!

My gosh, those are fightin' words there!

When the Cat is Away said...

Hehe. Our human is actually teaching us some card tricks !

those cartoons are adorable

My human tried that cartoon app, but it couldn't add my racing stripe that goes down my back and up my tail. 'Cause yeah, I have my exploding moments too.

Very cute cartoons and that game looks like fun.

Rumpy and Einstein explode on a daily basis but luckily generally poop out before 11pm.
Thanks so much for the support when Mr Buttons had to go over the Bridge. It was very sudden and he was a big part of our family. We miss him terribly as do so many as he was our official greeter. He never met a stranger only new friends. We wish you all could have met him. He was a failed foster which is the best kind of kitty
Purrs dear friends
Timmy, Dad Pete and Family