Thank you all for your prayers and purrs and good thoughts for my mom's cat, Sir Moose-a-lot Goodyear Roadkill Thunderbottom, who had surgery on Monday. He is doing really well! 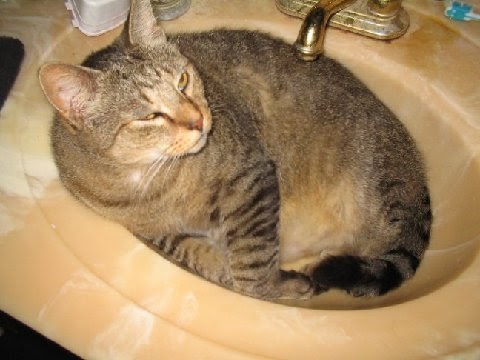 Turn out the light and leave, there'll be no hand washing here today.
(wish I'd asked for a new picture of him! but here he is in his old round shape)


He had managed to gain back some weight before surgery thanks to his antibiotic and appetite stimulator putting him at 12 pounds!

We were worried that the lump in his mouth/jaw might be a tumor, might be cancer, might be something awful, but hoping it was just a tooth. Even that would not be very nice, but better than the alternatives. With his age and condition, we were also worried about just going in for surgery. My mom said he's only around 11, which isn't terribly old but does put him in the senior category.

Moosey came through the surgery well though! And the lump was the gum pockets around two broken teeth, all swelled up and over the breaks. It's possible someone may have kicked him. And it's possible that this could have happened before my mom got him when he was running around the cemetery near my sisters house, or on his recent jaunts. Or who knows really, how they broke, but they were. The doctor removed those broken teeth and some of the overgrown gum tissue as well as his remaining top fang because it was pocked full of cavities. Poor kitty! He has his bottom fangs still, and other side teeth, so he's not down to just gums yet!

And the really good news, he's already eating like a... well like a moose! He wasn't allowed to have anything until 7pm after his surgery and he was NOT happy about it! He bugged my mom, telling her over and over that his dishes were empty, darn it! FEED ME! But she stuck to her guns. And then he found some dropped dry food behind his empty food dish! Seriously, how did he even want that with a sore jaw? Oh yeah, he was on pain killers and antibiotics, feeling no pain!

And acting like a goof! She said he was pouncing around the kitchen like a little nut! I don't think he's felt good enough to play in a while so it was good to hear that he's all feisty and fun again! Of course, he might just be high on pain killers, but we'll take it!

And now that he's back on food, he's even happily eating his hard food which he loves and had to give up for the pain. And he still has lots of canned goodness and those bisques and chowders and gravies that we started him on when he started having trouble eating. He's one happy kitty on his way back to being fat and happy! (hopefully not back to 25 pounds though hee hee)

Thank you all again, for the good wishes! We're so thankful mom's boy is on the mend!! 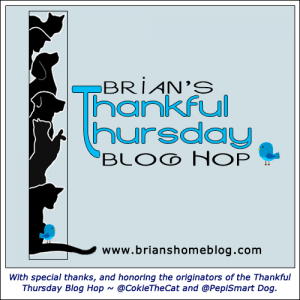 I'm so glad to hear the good report on Moose!

Katie's mom here: Nothing in Blogger could make me happier than t read this absolutely perfect and extremely happy news! Smoochies to Sir Moose-a- Lot and his family too really, for taking such excellent care of their baby.

So glad to hear the good news and that Moose is recovering well!!! Linda, Pepper, and Dublin

That's great news about Moose. We purr that he continues to improve.

We are so thankful all is well again and normal is returning, happy dance! Thanks for joining the Thankful Thursday Blog Hop!

That is wonderful news!

We wanted to thank you for the kind words you left for Cousin Trooper. He was a super ManCat and we will miss him.

Such good news! Glad he is doing so well!

Yay for Moose! I get that look from Bear quite often ... especially when I turn on the light in a dark room he occupies ;)

Alasandra, The Cats and Dogs said...

We are so sorry about all the health issues Sir Moose has had to endure, but pleased to hear he is on the mend. We are sending healing purrs for his continued recovery.

We stopped by to wish Leo a Happy Gotcha Day, and we will try to do better about keeping up with everything going on.

APAWS!!! so purrleased that Mr Moose is doin' well and not cancer.

Ouchie, reading about broken teeth and inflammation! Glad that Moose is feeling better!