I think Leo got a touch of revenge yesterday. I say think, because the evidence is circumstantial and I don't have access to a crime lab for DNA analysis.

I was petting Star on my lap last night and I noticed something funny about the top of her head. There was a stiff tuft of hair and I asked her "what have you gotten into now, little girl?" She declined to answer of course. I figured something had stiffened the fur, something wet or sticky maybe.

I took the tuft between my fingers and thought I could scrape whatever it was off with my nails. But it felt funny.. So I looked closer. It wasn't ON her fur, it was in it. She definately had something stuck in there. I carefully dislodged it and found.. a claw.

Ok, not a whole claw, more like a claw sheath. Sort of like a thin sideways slice of a claw. Like it pealed off. And it was huge. I checked closely and I do not think it was embedded in her skin or skull, but I plan on keeping an eye on the area for a while to make sure she doesn't get an abscess.

The so far non-existent injury aside, somehow she got a claw stuck in the fur in the very top of her head. As I said, it was a LARGE claw. Star has short thin claws, even when they haven't been trimmed in a long time, they don't get very long.

Leo, on the other hand, has HUGE claws, long and fat and highly curved. Just like the bit I found in Star's head. Flat, and sheath-ey, like the kinds I always find after Leo plays and sleeps on our bed. For some reason he sheds these sheaths a lot! I've never had another cat lose so many.

The vet told me that because he's polydactyl, Leo's claws will grow faster than cats with the normal number of toes. I thought he meant just the spare ones, but this has not proven to be the case. All of his claws grow very fast and very curved and very pointy. Even his wonky claw grows fast! (His wonky claw is a non-retractable oddly shaped flat wide claw that usually grows out with two points that look like a crab claw, when the vet trims it, it looks like a little flat square.)

So did Leo finally get back at Star for all the attacks? Did he get in a good hit? I know that they fought at least twice yesterday morning after I went down stairs. I heard them upstairs battling, the little brats.

Star is usually the attacker, though Leo will provoke. Star has fast paws, she can hit you six times before you can register that she's hitting and move. Leo runs faster and can usually stay out of reach of those fast paws.

A few weeks ago Leo was sporting a scab on his nose, presumably Star got in a good swipe. Was this revenge? A lucky shot? As I said, circumstantial evidence.

There is a slight possibility that it came from Star's dew claw, which is longer and more curved. But I've hardly seen her lose any claw sheaths.

As I said, without DNA testing, there's no way to know what happened. And neither of the suspects are talking... 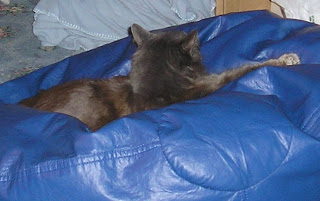 Star: I have nothing to say about the incident. 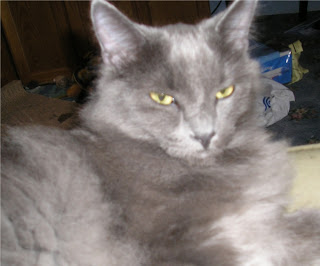 Leo: Oh, I MIGHT know what happened.. but I think I'll just enjoy... I mean, keep that for myself..
A boycat can keep a secret once in a while, can't he?

We don't blame you for not telling Leo. Keep your mum guessing.

I love your serious face!

I have found a claw sheath right smack dab in the middle of Abby's forehead.

It is those big silent types you have to watch out for. Sassy is twice the size of Callie, but for all of her size, she is very slow to angry. However, when she does -Callie is smart enough to hide under the table!

We have lots of secrets here too. If only my human knew...!

We fight sometimes too and then, we end up in a kitty pile!!...Keep those secrets, sweeties and keep your Mommy guessing=it's amazing how much those humans think they know!!MOL :)...Happy week ahead, precious friends...xoxo...Calle, Halle, Sukki
PS...Loved your Monday Funnies!!

Star...Leo...PLEASE! PLAY nice..be GOOD to one another and STOP THE FIGHTING!!!

Ours can fight when locked on different sides of a door! Cats!

One of the Kitties Who Came Before me losted a TOOF biting his brofur. The Human didn't have much sympathy for him. She figured if he bited his brofur THAT hard, he deserved to lose the toof. Fortunately the brofur had such thick dense furs it didn't really even penetrate his skin, MOL!

Andrea, I would go to court with the sheath as evidence against Leo. Here's the legal standard for circumstantial evidence: When looking at two competing explanations, the one that makes the most sense is admissible to show culpability. Or, to put it another way: If the evidence plus explanation is consistent with the defendant’s innocence, not guilt, via a far more reasonable conclusion exonerating him, then the evidence is barred and the guilty argument forbidden as being too prejudicial.

Seems to me that you have evidence plus a more convincing argument in favor of Leo's guilt. I say the evidence comes in, and let the jury decide.

Anyway, there's your argument for the judge -- I predict the evidence plus explanation comes in, and Leo goes to jail. Bye Leo. You'll be out soon.

I would say guilty but, then again, are cats really ever guilty of anything?

Ah those loose claw sheaths! We like ta leave them unner the blankies so TBT will roll over them at night and get pricked... MOL!

TBT keeps loose whiskers in a pretty jar, but he is thinking that iffen he been keepin claw sheaths too in another jar, it would be fuller.

Do you need a mouthpiece Loe? I can give you a number.

Hmmm. Well at least it was a nail sheath and not a FANG!!! And Leo, stay mute...you know the saying ...innocent until proven guilty!! ;) 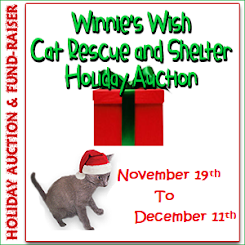 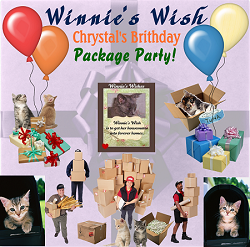